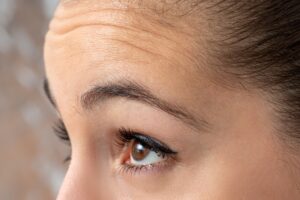 Out of sight, and out of mind might be a good solution for some problems, but combating the signs of aging on your face isn’t one of them. It’s pretty hard to keep your face out of sight or out of mind unless you never look in a mirror, so instead of ignoring your frown lines or denying that they exist, fight back with Xeomin!

Xeomin is a brand name for the neurotoxin Botulinum type A (incobotulinumtoxinA), a double-filtered smart toxin made specifically to reduce the appearance of frown lines (those deep furrows on the forehead and between the eyebrows, also called glabellar lines). While there are other injectables of this type available, Xeomin is a newer (and better) option for frown lines.

Xeomin is manufactured with a focus on purity and performance, making it different from other botulinum toxin injectables. By double filtering Xeomin with a proprietary XTRACT­­ Technology™ process, all unnecessary proteins are removed, leaving nothing but the therapeutic components of the medication which is required for effective and consistent smoothing of even stubborn frown lines.

How Does Xeomin® Remove Frown Lines?

Xeomin works just like any other botulinum toxin injectable by blocking the chemical signals that cause muscle contractions. This relaxes the muscles at the treatment site and subsequently smooths that area of the face. Xeomin is made specifically to be injected into the forehead and area between the eyebrows, smoothing those creases caused by many facial expressions (not just frowns).

Xeomin was approved by the FDA in 2011 for the treatment of glabellar lines (frown lines) on the face. Xeomin is administered in a quick, 10-20 minute outpatient appointment that requires no anesthesia or downtime. While some patients report mild side effects like headache, blurred vision, or muscle weakness, most patients are able to use Xeomin with no issues. As with any medication, patients should be monitored for signs of an allergic reaction when first using Xeomin.

If frown lines are killing your vibe, let us show you how Xeomin injections can turn your frown upside down! Banish frown lines and the other signs of aging with our full range of aesthetic treatments at Ultimate Image Cosmetic Medical Center in Tampa and Clearwater. Give us a call at (727) 799-7000 to schedule your Xeomin consultation today!